Can You Bring an Electric Razor on a Plane?

I hate having a “five o’clock shadow” and always feel rather grubby if I am unshaven, particularly after a long overnight flight.

So being able to shave before landing can make me feel much better, but can you take an electric razor on a plane and use it?

The Quick Answer: According to the TSA rules, all types of electric razors can be taken on a plane including rechargeable, battery-operated and corded. These can be carried in either your carry on luggage or your checked luggage. You are also permitted to use them onboard.

You have no need to worry about turning up to that important meeting after a long flight when you arrive at your destination looking like a hobo as you can smarten yourself up before you land.

Can you take an electric razor through airport security

There are no restrictions on taking an electric razor through a security checkpoint at the airport, whether it is a battery, rechargeable or corded razor. They can be left in your carry on when the bag goes through the x-ray machine so you do not normally need to remove them and place them in a tray.

As well as looking on the TSA website, if you are unsure about anything you want to take through airport security in your carry on and checked bags you can use the Transportation Security Administration #AskTSA service on Twitter.

This is their reply to a query about carrying an electric razor in hand luggage.

The same rules apply to taking an electric toothbrush on plane.

Can you use an electric razor onboard?

As well as being able to bring a razor on a plane in your carry on, you are also able to use it to shave on board with most airlines if you wish to smarten yourself up. That is unless it is a corded razor of course as there are unlikely to be any outlets to plug the razor into.

These are particularly suitable to use when flying as using the little sink in a tiny aircraft washroom to wet shave isn’t the easiest thing in the world to do.

Can you take an electric razor in your checked luggage?

There are no restrictions on whether you can bring electric razors in your checked luggage, no matter whether they are corded or cordless electric shavers.

Even rechargeable shavers containing lithium-ion batteries are allowed in checked baggage as the batteries cannot be removed.

If the lithium batteries were removable then they could not go in checked luggage separately so the electric razors have to have the battery inside.

Remember that if you are traveling overseas, particularly to Europe, that your US plug will not fit into a wall outlet there. In order to use electric shavers, or charge them up, you will need to take an adapter with you.

The one I use, which covers every possibility, is the Ceptics World Travel Adapter and is available on Amazon. 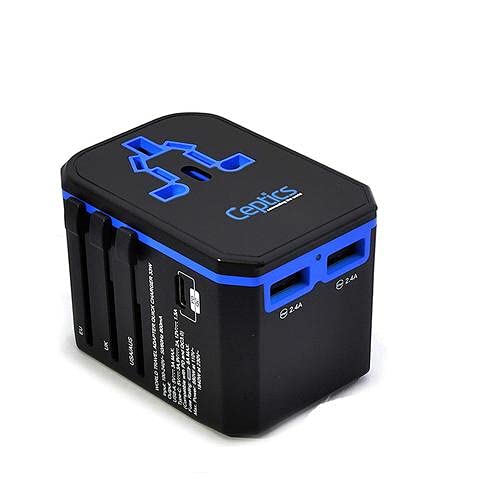 Also the voltage is different in other parts of the world to the 110v used in the US. For example, 220-240v is the standard voltage in Europe and elsewhere.

Fortunately most electric shavers available today automatically adapt to different voltages but you should check the specification of yours before you leave just in case it is 110v only.

Your electric shaver could be damaged and burn out if you use it on the wrong voltage.

What about wet shaving razors

Can you take aftershave in your carry on?

You will probably want to splash some aftershave on your face after using your electric razor. You can take aftershave on board with you in your carry on bags but you cannot take bottles larger than 100ml (3.4oz) through airport security due to the restriction on the size of liquids allowed in carry on baggage.

Fortunately many aftershave bottles are smaller than this so it shouldn’t be too much of a problem. But remember, it is the size of the bottle, not the amount of aftershave in it that is important. So you cannot take a 200ml bottle in your carry on bag that is only 25% full. That would have to go in your checked baggage.

Do electric razors have lithium batteries?

Some modern electric rechargeable shavers have lithium batteries but others have either nickel metal hydride or nickel cadmium batteries.

Can you pack shaving razors in checked baggage?

You can pack an electric razor, disposable razor or cartridge razor in carry on and checked bags. You can only pack straight razors or a safety razor (and blades) in checked baggage as they are not permitted in cabin baggage.

Will my electric shaver work overseas?

Your electric shaver will work overseas but you will probably need an adapter in order to plug it into an electrical outlet in Europe or elsewhere.