Do the TSA and Airlines Permit Umbrellas on a Plane?

If you are traveling to or from a country (or state) where rain is likely and you don’t want to get wet then being able to take an umbrella on a plane with you is important.

I have arrived at a few smaller airports where I had to walk across the apron to get into the terminal building in torrential rain and wished I had an umbrella in my carry-on luggage.

So, are umbrellas allowed on planes?

The Quick Answer: The TSA allows you to take an umbrella through airport security but whether you can take it on a plane does depend on the size as some airlines won’t allow large umbrellas. A folding umbrella is always allowed in either your carry-on bags or checked bags.

Read on to find out more about which type of umbrellas you can take on a plane in detail as it is not as clear-cut as you might imagine.

Can you bring an umbrella through TSA?

The TSA state “Umbrellas are allowed in carry-on bags. Please check with your airline for any size or weight restrictions.”

This would seem to indicate that you can take any size or type of umbrella through the security checkpoint without a problem.

Of course, umbrellas will be subject to screening using the x-ray machine to ensure that they don’t contain anything sinister. Obviously, you cannot take umbrellas with a sword or a dagger in the handle. As stupid as it seems even pointing that out, people do try to take them through airport security.

If you bring an umbrella with a sharp or pointed end then you may find that a TSA agent may take issue with it, due to the sharp prohibited items rules, so my advice would be not to take one of these.

The only airport I could find that may have restrictions when taking an umbrella through the security checkpoint is at Hong Kong International airport. If departing from this airport you might be screened separately, which all seems strange, but the reason is that there was a political movement in 2014 that used an umbrella as a symbol. It was known as the Umbrella Movement.

Airline rules for umbrellas as carry-on

Just because TSA security may permit umbrellas through it does not mean that the airline you are flying with will allow you to carry on umbrellas as a personal item.

Depending on how you interpret it, most major airlines state that umbrellas are “allowed in carry-on baggage” which would perhaps suggest that you could not take a large umbrella through eg. a golfing umbrella or a non-folding type of umbrella that wouldn’t fit in your hand luggage.

However, you can always take a collapsible umbrella onboard inside your hand luggage or a personal item such as a backpack or purse.

Umbrellas as a personal item

With most airlines, a larger umbrella may be generally permitted but it may count as your “personal item”. Personal items are an item you can take in addition to your carry-on baggage.

So take note of that if you intend to take a carry-on bag as well as a purse for example. In this case, an umbrella may not also be permitted to be carried separately as you will already have used your personal item allowance.

These are the airline rules for carrying an umbrella as a separate item, not if they are inside a carry on bag.

United Airlines state that an umbrella can be carried on board as an additional item, as well as your carry on and personal item. The only possible exceptions are if you are flying on a Basic Economy ticket or on a United Express flight. Full details here.

American Airlines confirms that an umbrella can be carried separately below. However, it would seem that a golf umbrella would not be permitted as it would be longer than 22 inches.

These items are free to carry on your flight, in addition to your usual carry-on items. A jacket and/or umbrella.

JetBlue says on their website “In addition to one carry-on bag and one personal item, FAA/TSA regulations allow the following items, which do not count towards the carry-on limit: Special items (coat, umbrella, infant car seat, etc.)”

There seems to be some confusion as to whether an umbrella would count as a personal item or not. However, it now seems that you cannot carry an umbrella that is longer than 24 inches.

You can take small foldable umbrellas and walking sticks (excluding hiking poles and other items with sharp ends) in your hand baggage. If you carry your golf umbrella, or a parasol, separately, it will count as an extra item of checked baggage and you may have to pay if you are over your free baggage weight, number or size allowance.

What size umbrella can you take on a plane?

Although many airlines do not specifically mention umbrellas they do have a carry-on length limit for any hand luggage or personal items. This range of sizes for taking items, including umbrellas, onboard goes from 21.6 inches to 24 inches, depending on the airline.

Before you leave you would be well advised to check with your airline, perhaps via their website, to see what their personal item limit is with regard to taking umbrellas onboard.

Many larger types of non-collapsible umbrellas often have a spike on the end. A golf umbrella will normally have these, for example, so you that can stick the umbrella in the ground while you take your shot. Since these would probably be considered as a potential weapon if taken on board, I would suggest that you do not take one unless in a checked bag (if it will fit).

Some airlines stipulate that umbrellas cannot be longer than 18inches long. Even if you can take a longer umbrella on board then some airlines will count it as your personal item allowance so you may not be allowed another, such as a purse, to be taken with you.

This is a reply from the TSA regarding a passenger’s query about taking a non-folding umbrella through the security checkpoint and on a plane:

My advice would be, if you need an umbrella where you are traveling to, then take a foldable umbrella on a plane in your carry-on as that will never cause an issue.

Having bought numerous foldable umbrellas in the past, many of which didn’t last beyond the first slight breeze, I would say don’t buy one that is too cheap or light. You certainly get what you pay for with these.

This passenger asked if she could take her collapsable umbrella in her hand luggage and the TSA’s reply:

If you are taking a stroller onboard it will be allowed if it has a small umbrella. As strollers are usually taken from passengers as they reach the aircraft and stowed in the hold then if it is attached then that won’t be an issue anyway.

This is the TSA @AskTSA reply to a passenger asking if they can bring a stroller umbrella with them:

Beach umbrellas are pretty cheap so why anyone would want to take one with them (or bring one home after purchasing one on vacation) is beyond me. Too much hassle in my view – just buy one and throw it or give it away at the end of the vacation.

Some people ask the TSA if they can bring a beach umbrella though and this is one of their replies:

A walking cane umbrella will always be allowed as it will be considered a mobility aid. 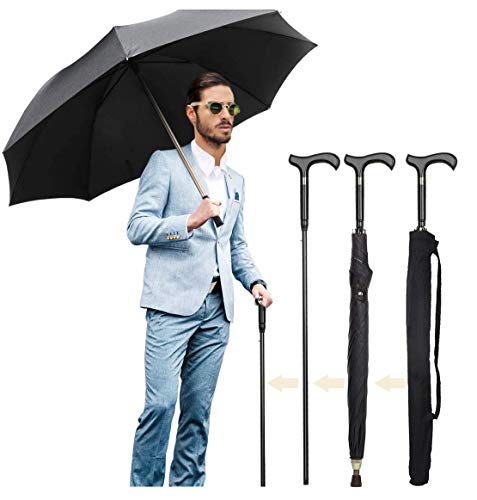 If you don’t have an umbrella that folds into a compact unit then these three types are the most popular on Amazon and are perfect as carry on umbrellas: 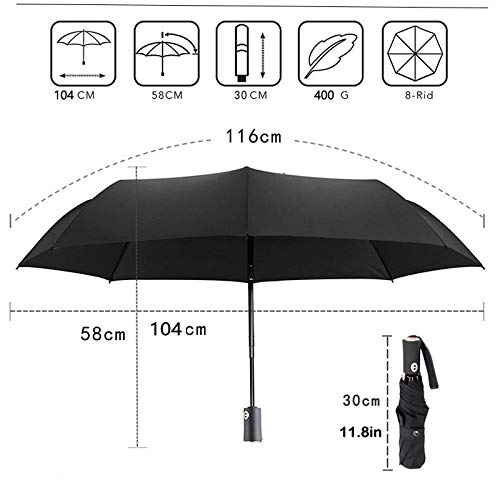 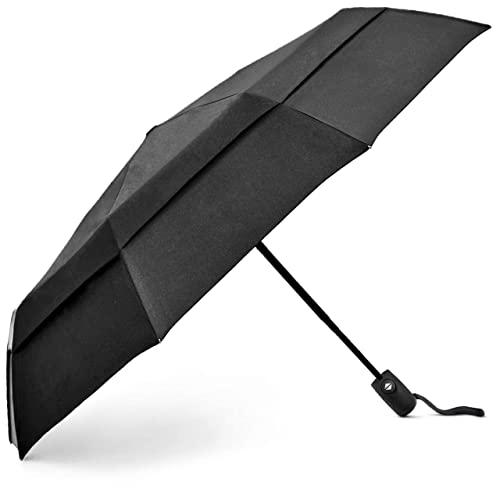 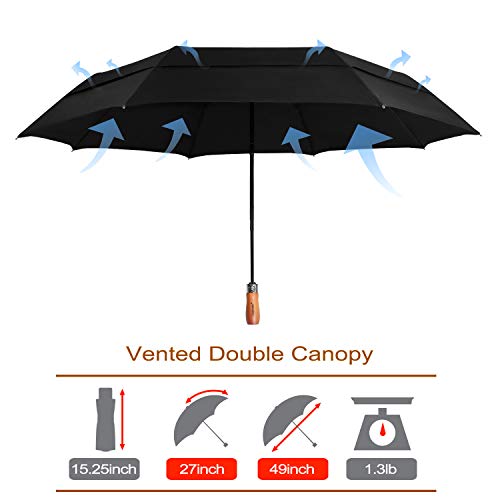 Can you pack an umbrella in checked luggage?

Any umbrella that you can fit within your suitcase, or another type of luggage, will be permitted without a problem.

I certainly wouldn’t recommend attaching a large umbrella to the outside of your checked luggage using straps etc as the likelihood of it becoming damaged during the baggage handling at your departure or destination airport would be very high.

This is a reply from the TSA regarding packing an umbrella in checked baggage:

On the funny side

It seems that carrying an umbrella on board can be useful even during the flight as this woman discovered on a Delta flight:

Other articles you may find useful

What items are not allowed in hand luggage

Should I lock my luggage when flying?