Electronic devices such as cellphones, tablets and laptops are an essential part of life these days and this applies to traveling with them too.

The last thing you want is an empty battery during a flight, or at your destination. So being able to take a means of recharging them while onboard is quite important – well to many.

But can you take a power bank on a plane, and if so which and how many portable chargers can you take?

The Quick Answer: TSA rules permit passengers to take a power bank on a plane but they cannot go in checked baggage, only in carry on. Power banks and portable chargers rated at 100Wh or lower can be taken on a plane without restriction. Only two power banks are permitted if between 100Wh and 160Wh. Power banks over that need prior airline approval.

The rules are quite complicated so you should check below to confirm that your power bank will be allowed.

What is a power bank?

A power bank is basically a rechargeable battery that is used to recharge other devices such as mobile phones, tablets, Kindles and many other types of electronic devices. They are also known by some as battery packs, but that is hardly surprising given that is exactly what they are.

You can charge them by connecting them to a mains source and then, once they are fully charged, can be used as a source of power to recharge your phone somewhere where no other alternative source of power exists – you could even use it in the middle of a desert.

How did we ever manage to survive without all of those, now indispensable, pieces of equipment for all those years before? Well, love them or hate them, electronic devices are certainly a part of everyday life now and having one run out of charge mid-Facebook is now the end of the world.

Where can power banks be carried on a plane?

Can you take a power bank in carry on?

Depending on the capacity of each power bank, up to two may be carried per passenger in your carry on bag into the aircraft’s cabin with you (see next item regarding capacities).

Can you take a power bank in checked luggage?

Although there is also the same small risk of fire with those batteries that are carried in the cabin, if that happened, the fire can be dealt with by the cabin crew using fire extinguishers.

Can you take a power bank through airport security?

You can take a power bank through airport security but you will have to remove it from your carry on bag and place it in a separate bin to go through the x-ray screening process.

The TSA agent will check the capacity of the portable charger before it is allowed through. It must be within the TSA battery pack limits set out in the section below.

What is the maximum power bank allowed on flights?

The rules on carrying all kinds of lithium batteries on a plane, whether in a power bank or not, are strictly observed by the FAA and the TSA.

The ecfr.gov regulations (adhered to by the FAA) state the following:

When relating this to power banks, which are normally rated in mAh (milli-amps-hour), it basically means that you can take two power banks with a maximum capacity of 27,000mAh each.

If you contact the airline you are flying with it may be possible to increase this to two power banks with a capacity of 43,200mAh but you will need their approval (in writing I would suggest).

If you are not sure whether you can take your power bank on a plane then you would be advised to use the AskTSA service on Twitter.

The following is just one response from the Transportation Security Administration to a passengers query regarding taking a battery power bank on a plane:

How to find the capacity of your power bank

Check the outside of your power bank and you will probably find on one of the ends the rating/capacity of the device either on a label or stamped/molded into the case itself.

This will probably give the capacity in mAh so will be something like 20000mAh or 10000mAh but it may also show you the Wh figure to save you from doing the math. If this is 100Wh or less you are good to go.

Caution: If you cannot find any markings on the device itself then neither will a security agent. This means that they will not be able to verify if it falls within the rules so will probably err on the side of safety and disallow it.

Calculating the Wh from the mAh value

The FAA legal limit for carrying a power bank on a plane without additional permissions from the airline is 100 watt hours.

To calculate the watt hours (Wh) of a power bank you use the voltage of the internal lithium cells, not the output voltage shown in the specification of the power bank. Lithium battery cells have a voltage of 3.6 volts. The formula for calculating the Watt hours is:

So if the capacity of a battery is 26,800mAh the formula will be:

The battery, therefore, has a capacity of 96.48 Watt hours so is under the FAA legal limit of 100 Wh allowed to be taken onboard a commercial aircraft. 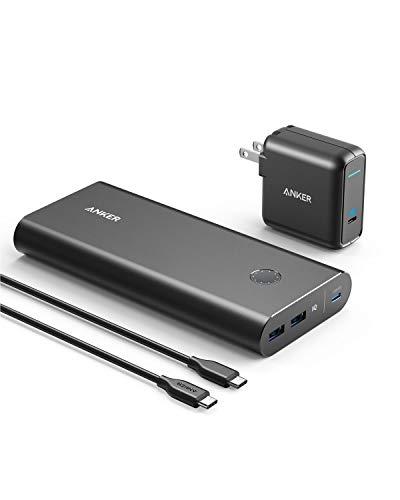 This power bank is designed to fall just below the legal limit of 100Wh for carrying on a plane so is ideal for heavy device users.

It has a dual input which means you can recharge it from two separate sources simultaneously to decrease the charge time to 6 hours from flat.

You can use it to charge most USB charged devices including iPhone 8 / X / XS / XS Max / XR (Lightning cable required), Android smartphones and tablets (including the Nexus 7), USB-C MacBooks / iPad (USB A to C cable required). It has three USB outputs so it can charge up to three devices at the same time.

You can purchase the Anker PowerCore 26800 on Amazon. 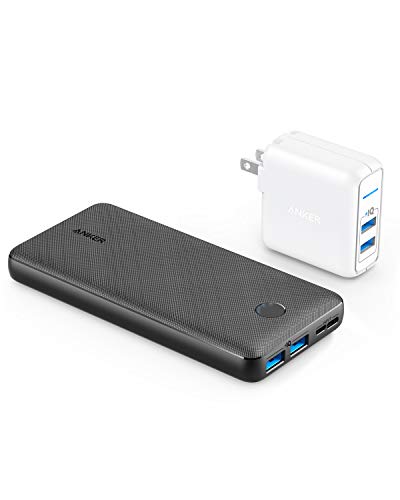 I have an Anker Powercore 20100 portable charger and have used it without problems for the past couple of years. This PowerCore Essential 20000 is a newer version of the same type.

It has a capacity of 20,000 mAh so well below the allowed maximum for flying but sufficient for most average users’ needs.

It can do everything the power bank above can do but has a slightly smaller capacity and only has one power input so charging from empty can take up to 10 hours.

It has two USB outputs so can charge two devices simultaneously.

You can purchase the Anker PowerCore Essential 20000 from Amazon.

Passengers may take a power bank on a plane but they cannot go in checked baggage, only in carry on. Power banks rated at 100Wh or lower can be taken on a plane without restriction. Only two are permitted if between 100Wh and 160Wh. Power banks over that need prior airline approval.

Also read: Can you charge your phone on a plane

Can I bring 20000mah power bank on plane

If the voltage rating is no higher than 5v it would be allowed. This is confirmed by the formula [(power bank rating mAh/1000) * voltage] would give a Wh rating equal to or less than the allowable 100Wh. Check that voltage on the specification label. Over 5v and it would not be allowed.

If the voltage rating is no higher than 3.3v then using the formula [(power bank rating mAh/1000) * voltage] would give a Wh rating equal to or less than the allowable 100Wh. Check that voltage on the specification label. Over 3.3v and it would not be allowed.

How many power banks can I take on a plane

Each passenger can take two 100Wh to 160Wh power banks in their carry on. You can take more power banks than that with a lower rating than 100Wh.

Anker power banks are allowed on a plane subject to the maximum power output restrictions of 160Wh before airline approval is required.